Well, after our trip to Disneyland, Aiden is obsessed with Buzz Lightyear. Who knows why, considering he was over and done with Buzz about two years ago, but who am I to argue? At least he has a favorite thing picked right now!

That said, he has no interest in watching the movie. Maybe it’s because Buzz isn’t actually running around fighting aliens in the movie like he is in the ride at Disney.

As such, he has decided this year he wants a Buzz Lightyear party. Works for me!

Now, I love my kids. I love decorating. I love party planning and snacks and goodies. But dude, not for a 5 year old’s party where the biggest hit of the day is the cake and they have no real concern for any other food served, much less what the decorations look like or how long mommy spent getting it ready.

Likewise, I keep my house pretty clean, it’s small but it’s as tidy as it can be for having four kids running around all day. And I love my friends. But bringing lots of kids and friends and parents over here for a party would get cramped.

So while all the other moms in the world (or at least that’s what it feels like) are Pinterest-ing and cricket-ing and craft-ing (yes, I know that one’s actually a real word, but I like the hyphen to continue the theme), I’m letting others do most of the hard work. 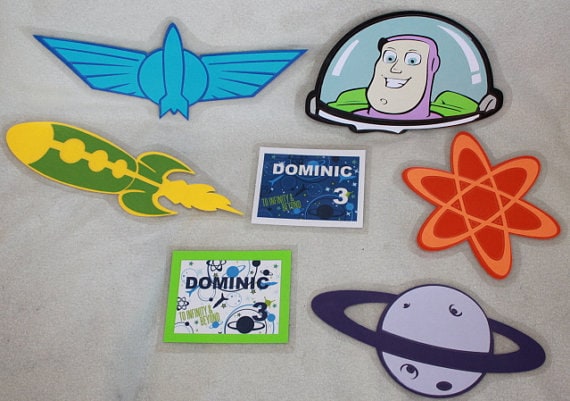 This awesome shop made the party decorations and cupcake toppers for me.

(Thought I did actually make his invitations, so I did SOMEthing at least!)

And MyMuseum will be doing the decorating and providing the play space.

I imagine it will be an entirely different world when the triplets turn 5, as they’ll have three best friends, and likely many more people to invite. But a 5 year old boy? He’s easy. Couple of best friends, couple of family friends, and a couple of hours just to hang out and play. We’ll keep it simple as long as we can!