And they’re off! I’ll add the better camera pics today but this was from drop off. (Jace wasn’t really having issues I was just trying to hide and he was trying to look for me… Haha. The girls, clearly, could have cared less!)

Well, they finally cannot be coerced to pick one birthday theme, so we went the creative route with three sets of decor on one cake. Lucky kids! 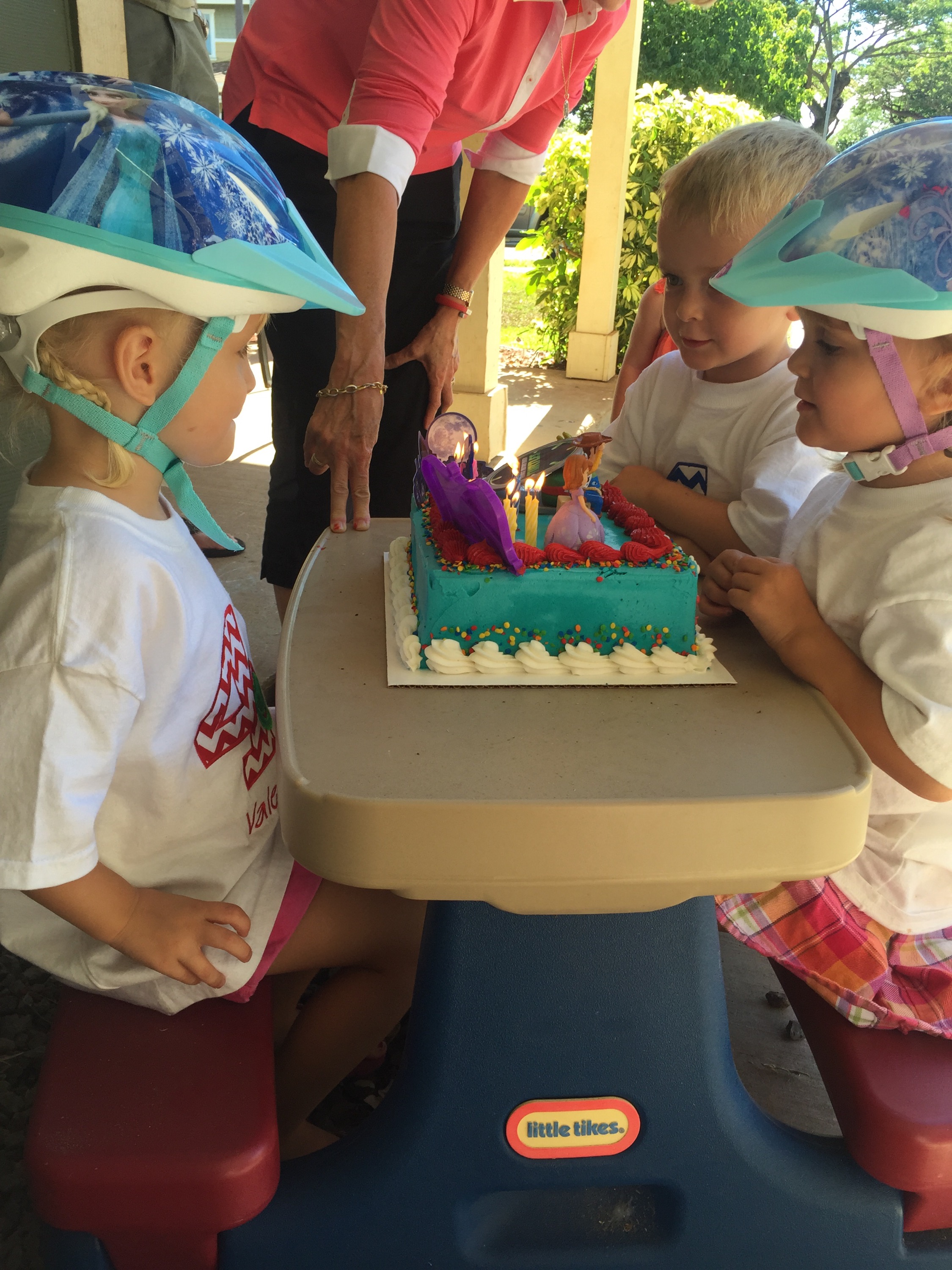 Hard to believe. Thankfully there are none loose so we should get a short reprieve from the loose tooth debacle!

We are very excited getting ready for Christmas. All four kids this year actually get it and are anxiously awaiting Jesus’ birthday party and Christmas festivities. One benefit of living in Paradise is that our holiday fairs are held outside. In December. It’s a nice change from snow suits (though I’d still love a miraculous snow on Christmas!)

We had balloon animals… And, of course, Santa! We arrived on island June 20. Finally on July 30 we received our household goods AND van!!

We are now surrounded by boxes, but it’s almost like Christmas in July around here!

Pre-children my first goal was always kitchen followed by bedrooms and media center. Now? Media center followed by game room. A lot more gets accomplished when they are distracted!

The picture says it all.

It’s funny. We still get asked, “How do you do it?!” incredulously by anyone and everyone we know. Honestly? We just do. There’s not really another option is there? Shy of getting a bazillion dollar a year job and hiring nannies and housekeepers galore?

But it made me think… What’s so different? Really?

1) You have to let the small things slide. For example, it’s time to start potty training. Your daughter wants Mickey Mouse underwear. You can
a) get the boys underwear
b) try to convince her Minnie Mouse is just as cool
With the first kid? I tried to stay gender specific for everything. When trying to potty train three at once? You can wear anything you want as long as it stays dry. I. Don’t. Care.

2) On that same note, your daughters train faster than you expected, leaving an abundance of pink pull ups behind. You can:
a) Throw them away/donate
b) Try to exchange them
c) Let boy child wear them. Because, really, no one else will see them anyways.
Let’s just say Jacen loves Minnie and Ariel as much as he does Mater and Lightning, and it works for me.

3) You learn to pick your battles. Snow boots in the 70 degree weather with a sundress? Go for it. You want to wear two hats? Be my guest. Not. Worth. The. Fight.

4) Toys can be used in any matter they want. As long as it’s not endangering others. You want to use that badmitten racket to hit a beach ball? Have fun. Refer back to “picking your battles.”

5) Crying happens. A lot. No, I don’t always intervene. They learn to fight to get their way or how to give in. They learn when to pick their own battles. You’d be surprised what is worth it to them.

6) Two words: baby gates. They are gated in their rooms at night and I don’t see that changing till they’re old enough to get out on their own. Even then I might just get better gates.

7) No short order cooking. These kids love anything from calamari to grilled cheese. But that doesn’t mean they always eat it. They don’t get something else though. If you’re full and don’t want it, that’s fine. We don’t force a cleaned plate. We don’t force you to eat more than the number of bites you are old (to make sure you try it). But if you get hungry later? Sorry, too bad.

8) We go out in public, and do so often. They have always gone places with us. Yes it’s crazy and chaotic, but if you don’t do it you won’t know whether they (or you) can handle it. How can they get better at it if you never try?

(Or wine.. Whichever is more accessible)

Since I will likely forget to do this in two weeks (how did that happen?!), I figured I would do a two year wrap up real quick.

I thought one two year old was… Challenging. And amazing. But mostly challenging. They learn to argue, to disagree, and how to be opinionated. But they also learn sharing and co-play, and how to cuddle and have fun WITH you rather than just at the same time as you.

With three of them? It’s even more entertaining. They try to boss each other around (which doesn’t work well… Let’s go back to the “opinionated” and “argumentative” statement).

Take this for example.

Jaina stole the Mickey Mouse MobiGo game. And they ran around the house fighting over it for half an hour. To the point they were so exhausted Jaina fell asleep. With the game still firmly in her grasp behind her back.

The girls are fully potty trained. Unfortunately with the ability to go to the bathroom solo comes the ability to completely strip naked solo. Sorry, those pictures won’t be taken or posted!

Jacen has decided that Aiden is the coolest kid in the world and imitates his every action (for better or for worse).

Valerie is a parrot- she will repeat anything and everything she hears (for better or for worse).

Overall, we’ve survived, and most importantly so have they. They will arrive in their fourth home on their third birthday (not counting the NICU or Fisher House!), have travelled cross country in 8 days via car, flown 5000+ miles, lived in three time zones, and had more experiences than kids twice their age. Whatever you want to say about this transient military life, it’s never boring, and they are thriving, which is what matters most! How many kids do you know will have experienced snow and beaches, planes and road trips, and visited so many amazing national parks and museums in their first three years?