If you didn’t see it a few posts ago, we are raising money for Fisher House again this year. You can learn more about their program here.

I am so blessed to have an awesome set of friends who are amazing business owners! AnfieldShop.com is proud to team up with the Fisher House on Saturday. All profits from the shop will be donated to this great charity. Shop and support!

Marine Corps Marathon is like no other. Called “The People’s Marathon,” there are no elites – no racers getting paid to be there. It is entirely entered by runners wanting to challenge themselves for the sake of the race.

It was cold. Very very cold. But I’d prefer that to rain/wind/snow/heat, so I’ll take it!

The race was honestly the best I’ve ever seen/run. It felt like there were just as many spectators on the course as there were runners (and there were a LOT of runners).

And the best part of going in with no real time goal except for to beat the bus? You can be one of “those” people who stop and take pictures. Because, well, why not?!

We were even able to meet up with some amazing friends from our last boat (the Navy really is a small world.. or it at least makes the world feel smaller), and it was wonderful to meet their baby girl! She was even sweet enough to take a pic for us!

And the best part of any race? The bling. And this is by far one of the coolest medals I’ve ever gotten (with the only exception being the Salinas Valley Half Marathon’s… it’s a wine bottle cork, what’s cooler than that?!)

In the end, we charged D.C., “beat the bridge” (didn’t get picked up by the slow runner buses), and conquered the last hill at the Iwo Jima memorial.

Thank you, Congress, for doing your job and reopening government so that the race wasn’t cancelled! And THANK YOU to Team Fisher House for your support, the awesome race goodies, the crowds cheering us on, and the food tent at the end.

So in conjunction with our Team Fisher House fundraising campaign, a good friend (and quad mom!) offered to host a fundraiser for me!

Have you ever heard of Scentsy? 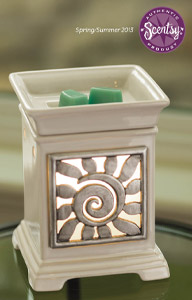 It’s absolutely amazing, especially for those of us with kids. No, I’m not getting paid personally to say this (though it will benefit Fisher House!!)

It’s home fragrance WITHOUT a flame! How cool? The wax that melts, while hot, won’t burn you or your kids, and it’s powered by plugging it in and using a lightbulb.

For anyone who uses/likes Scentsy products, or who is interested in trying it, I have a fundraiser open this week through Friday the 31st! You can order right online, the products are shipped to you, and 20% comes back to Fisher House! Fisher House provides a “home away from home” for military families to be close to a loved one during hospitalization for an illness, disease or injury. Great way to restock and help out all at the same time. My personal suggestions? Beach Scentsy Bar (smells like pina colada and helps me pretend it’s summer even when it’s 50 and raining outside), and the buddies with french lavendar scent packs!

And if you have any questions, please contact me!

And you know what is even better than candles/fragrance?

Chocolate and Cheese Fondue. The makers of Scentsy now have a new line out called Velata. It is a fondue warmer which the dish is microwave and dishwasher safe, and the chocolates and cheeses are AMAZING. Personally, I love the Caramel Milk Chocolate 😉

She also has a Velata party open if that’s more your speed!
https://karihickey.velata.us/Velata/Buy

Not sure if you remember me saying last year when we were doing a local event for March of Dimes, that if I ever were to actively raise money for a group it would be the Fisher House.

A lot of people haven’t heard of Fisher House Foundation. Understandably so, as they serve military families so if you’re not military you might not ever cross paths with them.

We, fortunately, were able to take advantage of the house in Tacoma, WA near Madigan Army Medical Center. Located only 1 mile away from the hospital (and therefore the NICU), our social worker in the hospital kept in touch with them during my hospital stay. We had actually looked into a room there for Steven and Aiden, but as we didn’t have childcare set up down in Tacoma, it didn’t work out for them to stay closer to me when they’d have to commute back to Bangor each and every day.

So after being discharged from the hospital, instead of having to drive an hour away to our house, we merely drove a mile down the road. I could see the hospital from the yard if I tried, and it was so comforting to know that while I was leaving my sweet little babies at the hospital, I could be back in a matter of minutes should the doctors call me.

We stayed there for over two weeks. There was food in the kitchen, girl scout cookies on the counter, toys for Aiden to play with, a great play yard outside, and the staff was incredible. They were kind, provided a new toy and blankets for the kids, and it was so nice to know that we were taken care of.

Once Jace came home, I was even able to walk back and forth, which was so much easier than trying to drive at the time!

And did I tell you the best, most amazing part, of this whole thing? IT WAS FREE. You read that right. FREE. They did not ask a single penny for any of it. And while a couple weeks doesn’t seem that big of deal, you have to remember the 4 weeks prior Steven was driving an hour a day each way to come see me. Add up those gasoline charges. And imagine how much a hotel would have been so we could stay down near the babies. Not a pretty picture is it???

I swore that should I ever run a race that Team Fisher House (a fundraising group for Fisher House to run races around the country) was a fundraiser for, I’d sign up in a heartbeat. And we did. We’re actually scheduling our lives in October around the opportunity to run Marine Corps Marathon in DC. Steven and I are both running, and have a family fundraiser page.

We are asking you for your help. Fisher House helps thousands of families across the nation every day. Not every story is as happy as ours, or with as good of an outcome. Wounded warriors and their families are taken care of for months at a time (one of the families we met in WA had been staying there for over a year while their service member was treated!), they are often helped so much more than we were. But we cannot say thanks enough. What they did for us took the worry out of our NICU stay in regards to logistics and our family and let us focus on what mattered: our babies and each other. And for that we want to try to repay them at least a little.

We’ll keep you updated as begin training, the plans for the race, and the results afterwards.

Thank you in advance for your support!